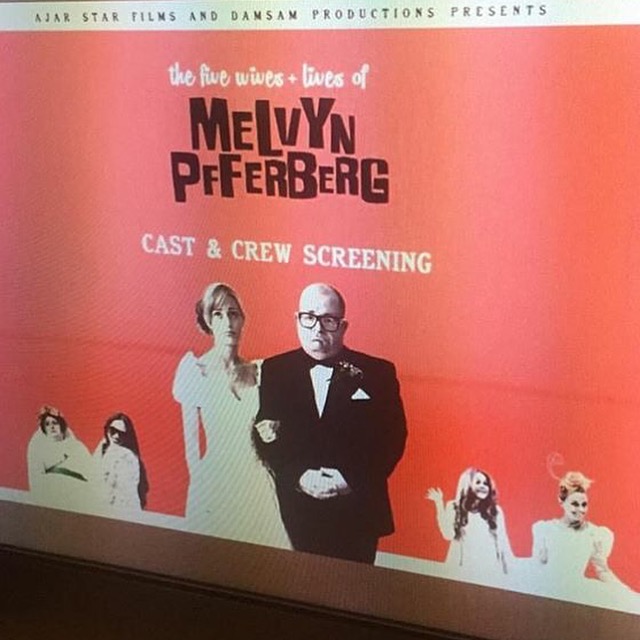 Often contrary to what your head’s telling you, it feels good to participate in something that seems, at the time, to be a leap of faith. The music world is full of such uncertain nuggets. Remixes and production jobs you never know will be approved. Gigs in strange places with hilariously convoluted logistics. Collaborations with orchestras that might, right up until you walk into the concert hall, turn out to be some elaborate practical joke. And spending a couple of years writing and recording music for a short film from under which the financial carpet has been pulled two or three times, but which ends up being completed via that seventh wonder of the altruistic digital age: crowdfunding.

Yes, it’s true. The Five Wives And Lives Of Melvyn Pfferberg, the 17-minute comic epic to which I have added my Britpop-meets-Klezmer noises, has been filmed, post-produced and, finally, unleashed upon an unsuspecting global gaggle of film festival curators. Director, producer and general auteur nouvelle Damian Samuels must have done something right because LA Shorts Festival, that jewel in the Downtown LA cultural crown, has enveloped our movie into its enlightened bosom and will host Melvyn’s world premiere on Sept 6. At times like this, I like to muse upon precisely which bits of our creation a hopefully-packed theater of LA hipsters will enjoy the most.

Will it be down-on-his-luck Melvyn weeping as he tramps through a park full of romantic couples taking a stroll? Will it be the unveiling of the “Cupidatron” – a futuristic helmet showing your future with anyone you shake hands with? Will it be the perfectly-timed performance by Smallville‘s Callum Blue as the dating night emcee? Will it be Melvyn’s grand entrance, watched by gaping speed-dating colleagues including a cameo from Basement Jaxx’s Felix Buxton? Will it be Melvyn’s slushy picnic in the pretty company of TV’s Brooke D’Orsay? Will it be the scene where Melvyn has a romp with a somewhat more enormously proportioned lover on a bed strewn with pizzas and tortilla chips? Will it be the bit where he’s manacled to an S&M wheel, or confined to crutches by a clumsy girlfriend? Verily, this is a short movie that packs in as many comic highlights as an entire season of Extras, but without the crap bits. 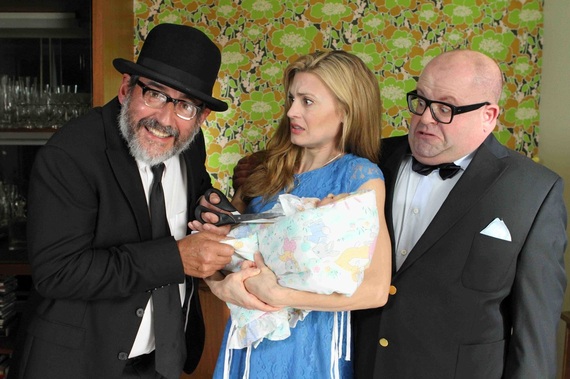 I’m no expert at writing film music. That’s it; there’s no “but” following that statement. I haven’t a clue. All I knew was that I could write and arrange some crazy mashups and record it with my production partner-in-crime Max Gilkes, and then slap it on the film, hoping that my years appreciating the work of Marvin Hamlisch, Elmer Bernstein and Hans Zimmer had done a tiny bit of good. To be fair, it took a few attempts. Several times Max and I had to return to the old drawing board, reminding ourselves that we were making a film soundtrack and not a cool indie record. At last we got the formula right, the man Samuels gave us the green light, and our sound designer – longtime Monty Python collaborator and general legend André Jacquemin – added the tunes to the action. Phew – it worked. only one question remained… a question that has bugged John Barry and David Arnold on many an occasion… who the buggering heck are we gonna get to sing the theme song?

Damian Samuels and I sat down with a vat of coffee and, if memory serves, drew up a massive list of people. All my names were either highly credible (i.e. unknown) or meat’n’potatoes indie rock and therefore utterly inappropriate. Samuels’ suggestions were all as camp as Butlins and therefore thoroughly outlandish and unattainable. After a while we got out a marker pen and turned the list into a preposterously proportioned Venn diagram with – once we’d finished – only one name lurking in the crossover section, and that name was the Spice Girls’ Melanie C. “Leave it with me,” smiled Damian, and we parted, me thinking, “yeah… right,” and him thinking, well, Christ knows what, really, but some sort of celebrity magic must have happened because a couple of weeks later we were sitting in the control room of Basement Jaxx’s North London recording studio, with Mel C herself on the other side of the glass.

Pop-star dissenters can shelve all their nonsense: Melanie was absolutely bloody wonderful. She showed up, watched the film, had a cup of tea and then nailed it. The song went from sounding like a Blur C-side to a power-pop classic within, well, two minutes 20 seconds. Damian, producer Max and myself went straight to the pub and dumbfoundedly reflected on the musical conjuring trick that had just occurred. It’s only a small part of the film, but as Damian put it, the whole thing has rocketed to another level as a result. What was I saying at the start of this blog about leaps of faith? It works both ways: when major players such as Melanie C, or Callum Blue, or Brooke D’Orsay, or André Jacquemin, or the Oscar-winning post-production houses Milk and The Mill, take a chance on a project such as ours, the momentum ratchets up a couple of amazing gears and the art that results acquires a fresh urgency and elevated quality: everyone wins.

We hope for many more festivals but if you’re going to be in Los Angeles on Sept 6, take a trip down to LA Live and have a look at our movie, I guarantee you’re gonna laugh your pants off…

The Fives Wives And Lives Of Melvyn Pfferberg will premiere at the LA Shorts Film Festival on Sept 6 at 9.55pm, at LA Live (Downtown).