What do bands do when they’re not doing anything? Often you hear their lead singers say in a kind of faux-weary manner (usually while brushing back a lock of greasy hair) “Yeah, man, we’re getting back from the road in a week or so… and then, y’know, we’re gonna take some time off.” What does this actually mean? Does life become one endless stream of sleeping late, daytime telly and long, lazy afternoons hanging out in the local trendy coffee place or bar? Well, not really. There are always dozens of things to do, hardly any of them madly exciting. You know when you’ve been on a business trip and you get back to the office and have to do the million things you didn’t do while you were on the business trip? That.

In our singer Fin’s case, he makes another record. That is simply what Fin does, in the same way he breathes and drinks water. I’m quite certain that if you locked Fin in an empty room for long enough he would always end up making a record somehow, even if he didn’t have any instruments or means of recording. So, when we returned from our last tour, Fin duly did this. Actually, the empty room analogy isn’t that far off the mark: he lives in a trendy minimalist apartment in Berlin (I’ve been there once; it just about manages to have a chair or two) and, rather like a baker who makes chocolate biscuit cake from all the leftover cake and broken biscuits, Fin constructed an entire album with the giblets of our recent studio album, Hard Believer. The result is Horizontalism, and of course I’m being a little disingenuous when I say it’s a mish-mash of offcuts. It is, of course, a highly sophisticated electronic exploration that even our manager doesn’t fully understand. It’s also one of the few examples of a whole album – or at least, 70% of it – being remixed by one person and then released as another album; another is Love and Dancing by the Human League, and Fin’s own particular inspiration, No Protection, Mad Professor’s dub re-reading of Massive Attack’s classic Protection.

So now, via the magic that is Skype, we go live to Berlin for Fin’s take on the subject. That’s right. I’m interviewing my own singer. Earlier, I wondered whether he’d get all self-conscious and shy and reduce his responses to a series of one (or maybe two) word answers. But of course not. Interviewing Fin is actually the easiest job in showbiz. Clear a couple of hours in your schedule, ask him a question, and like some demented talking Duracell bunny, off he goes… 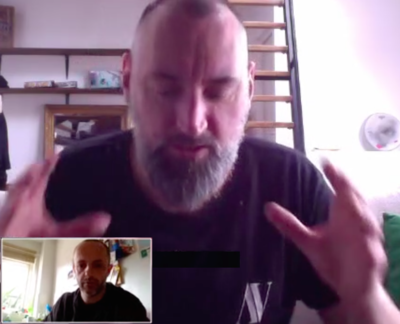 “I love my relationship with No Protection because I thought it was such a good idea, and I massively prefer the remix album to the original, because dub is much more timeless. I’ve always wanted to do a similar thing to one of our records. Then, when we were recording Hard Believer, we ‘out-sourced’ the digital noises, synths, strings and so on, and the material that came back from Zac Rae and from Grasscut’s Andrew Phillips was just awesome. You could play those sounds on their own without the rest of our instruments, and it sounded like an M83 record or something. But we knew, on the actual finished album, these noises would be buried in the background. So the versions on Horizontalism are a way of bringing those elements to the fore. These guys are like composers; they didn’t just provide a mood line over the top, they’ve actually done, y’know… stuff.”

“So I reckoned I had enough parts to give the remix album a go. The first thing I did was to take almost all my voice off, partly because I get sick of the sound of it, but also because I don’t think it goes very well with electronic music; perhaps because it’s too chilled, too downbeat. You don’t get many depressing dance tracks. You don’t get Pete Tong playing two hours of moody goth dance; you get two hours of ‘wow, best night of my life! We’re gonna fly so high!’ – and so on. And I don’t really do that. At all.”

It’s true. He doesn’t. Getting Fin to sing something happy is actually one of life’s major challenges. Practically the only optimistic song Fink has ever recorded is “Walking In The Sun”, and that was written by someone else (Jeff Barry). It’s fine; it just means our music doesn’t get featured in many romcoms.

“I started with the hooks: your drums, Zac’s noises, Ruben Hein’s piano. But you never know how the complete thing is going to sound with this sort of music until you’re done. Actually, with any sort of music; I don’t believe any musician has the full picture in their mind. Maybe Beethoven did, when he was deaf. But it’s the product of hours of wasted experimentation, a lot of the time.”

Are there fewer “happy accidents” when you’re sitting creating music on your own with a computer, rather than when you’re playing with a band?

“Absolutely. And there’s a lot more pressure, because it’s all on you. Although when you’re in a room full of other musicians, there are different pressures: you have to compromise a lot more, and you have to value other people’s opinion, which is sometimes fucking annoying.”

He says this last bit through mock gritted-teeth. At least, I think they were mock. 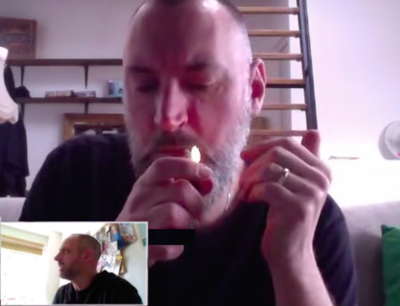 Fans of regular Fink will be pleased to hear that the new album also contains two new songs, with, like, singing and stuff – “Fall Into The Light” and “Suffering Is The Art Of Love” – although they were created around the same time as the remixes, and are consequently influenced by much of the same electronic rule-book, if not governed by it. I wondered whether Fin’s method of creating what is essentially “laptop music” has changed since doing it back in his early pre-band days?

“The physical process hasn’t really. But it’s without the old self-questioning and self-doubt: about singing, about songwriting, all of that. Because in the old days I was completely flooded with those thoughts. The other big difference is I’ve tried to make all the sounds much more real. I hire amps that are older than me, and I play them in a big empty room with one mic. I use organic instruments, like the guitar obviously, and things like my Tar which I brought back from Iran – all to compensate for the fact I’m making it on a laptop. Laptop records: you can totally hear ’em. Just like you can hear a record made in the 70s on a beautiful analogue desk with a load of valves.”

“Yep. I still set myself stupidly unrealistic goals, and unrealistic deadlines, and I fail to meet them, and then I beat myself up about it. So that’s the artist cycle. I sometimes spend two days getting myself into a spot where the performance is going to come out. Maybe I waste a day. Maybe I watch three episodes of Game of Thrones and go to bed really pissed off. But all that stupid wasted time is just to lead to those ten minutes when you go: ‘right, I’m gonna totally do it, I’m in the mood now.’”

Would you be tempted to play one of the new songs live?

“Are you turning this into a band meeting?”

“Yeah, definitely. Because just like any project, the stuff you’ve done most recently is your favourite stuff. Although the lazy side of me can’t be arsed. And the problem with this ambient electronic kind of thing is that it doesn’t really work in the live space. If you had a hundred foot video wall, perhaps. My time in Berlin over the last year has shown me this. I’ve been out to see friends DJing, and I’ve tried to work out why there wasn’t a live element: how come DJs don’t play guitar as a well? And I saw a band – who shall not be named – when one guy played the guitar and sang, and the other guy DJed and threw his arms in the air and tweaked knobs and so on… and it was so bollocks. It just didn’t work. But if you shut your eyes, it was fine; so actually seeing someone do something organic really ruined this clinical ethos of dance music.” 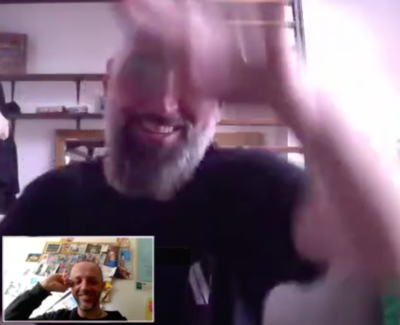 Horizontalism also features a Fink remix of a track by a Canadian band we like very much, Suuns, which I thought was an interesting choice for a remix, as their tracks often sound like remixes in the first place.

“Very good point, Mr T. But it’s more that… doing a remix is very different when you’re a fan. I love Suuns’ energy, and when we saw them live [at Plisskën Festival in Athens last year] it was so inspiring because it sounded like the record, but it was a totally different experience. Seeing it happen gave me a totally different read of all that material. And I so wanted to do a good job on the remix. But all the amazing stuff is there in the original anyway.”

Fin’s cunning way with a laptop meant that one of the Fink re-visitations, “Pilgrim”, was actually done in the back of the van while we were charging across North America on tour. Does he find it easy to accomplish stuff like that while we’re on the road?

“Not as much as I’d like. That tour was a month long, with lots of epically long drives – lots and lots of dead time – but I didn’t get eight or nine tracks done, I only managed to squeeze one out. Being in the right frame of mind is half the battle.”

True. And even when you get into the hotel room, you think, yeah, I’m gonna be creative, and then in the end you’re just like… fuck it.

“I know. Downtime is so precious. I was in a bathroom somewhere, I can’t remember where, some public toilet in a nightclub we were playing, and I remember thinking: on tour sometimes, being in a public toilet in a nightclub will be your only bit of private downtime in the day, and so you’d be like: I’m going to really enjoy this crap… when you do get time on your own on tour, your mind needs the time…”

As you might be sensing, the conversation drifts off after this, further into somewhat less Horizontalism-related banter. Bloody pop groups, eh? Miniscule attention span. So we leave Fin in his über-cool Berlin paradise, as he ponders his beats, his beard and where his next cup of coffee will be coming from. One of his treats in store over the next week is to hand paint something like 500 vinyl copies of the new record. “Why doesn’t he get an underling to do it?” I hear you cry. Well, that’s not really his style. A couple of years ago, he had to hand-write about 200 lyric sheets on some nice papyrus-style paper that one of our management team had picked up from Paperchase. Trouble was, they’d bought the type with little pink flowers embedded in it, and we decided this wasn’t quite the ticket, so while being driven from one festival in Rome to another in Milan, the three of us picked off all the pink flowers. It took almost the whole five hour journey.

And all I could think the whole time was: they don’t teach you this shit in rock school.