How Border Crossings Can Be Fun

It’s two in the afternoon and I’m just waking up. Lazy bastard, I hear you snigger. But let me explain. I’m on the Fink tour bus, somewhere in Ukraine. Earlier today we were woken at 7am (having not crept into our bunks until about 3am after the show we played in Minsk, Belarus) and told to get dressed and ready, passports and vaguely sober expressions close at hand, for the border crossing. 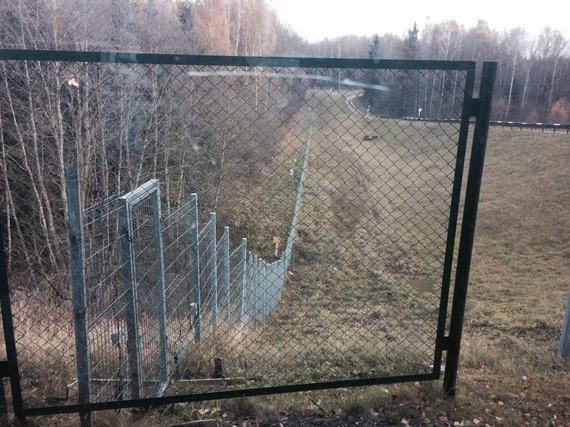 Border. Crossing. Two of the most feared words in the rock music lexicon. Our job as musicians is hardly brain surgery, but crossing international borders – along with staying sober at festivals and trying to sell gig tickets on a Tuesday in Thessaloniki – represents one of the few genuine challenges we encounter. And we don’t even do the hard bit. That honour is left to our long-suffering tour manager Simon, who somewhat heartbreakingly always begins the process with a happy smile and a twinkle of optimism in his eye, but ends up as deflated and depressed as a Labour candidate who’s just tried to win a parliamentary seat in Chelsea. To smooth the ride, Simon has procured for us a magical document known as a carnet, which is basically a long list of all the things we’re carrying on the tour, for border guards to check we’re not importing or exporting anything we shouldn’t. Problem is, the last person to understand how a carnet really works died in about 1975, and his stories of where to stamp the damn thing weren’t really exciting enough to be adequately passed down the generations. Consequently, border crossing takes… a while. 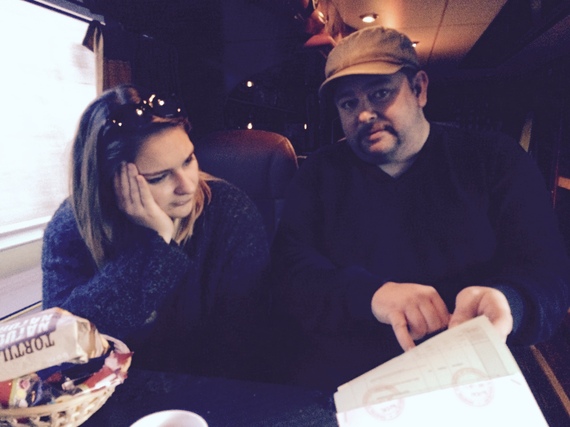 So we gamely jumped off the bus and stood about in the chilly Belarusian/Ukrainian air, and after a very long time – enough time for the bus coffee machine to run out of water three times – we were ushered into a little room where we queued up to have our passports stamped. Then we jumped back on the bus while Simon hurried from building to building, in the hope of finding someone who had once, long ago and probably during their internship, set eyes on a carnet. I’m shortening this story drastically, but sometime around 11am I gave up and went back to sleep. Now waking up at the aforementioned 2pm, I could be forgiven, I reckon, for assuming the border is many hundreds of miles behind us and that we’re perhaps on the outskirts of Ukrainian capital and our concert destination for the evening, Kiev. With one of his infamous glares of pessimism, our still-awake bass player Guy breaks the news that, in fact, we have only recently been given leave from the border and that we’re currently at a petrol station 10 minutes down the road. Seven hours. The entire border crossing has taken seven hours. But at least now our heroic German driver Matthias is free to speed, unencumbered, towards Kiev. Sadly our troubles are far from over. 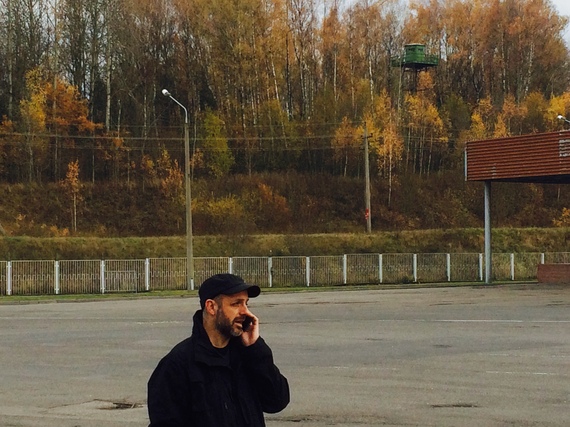 A couple of minutes later the bus slows down to a stop. Traffic? There is no traffic in northern Ukraine on a Monday afternoon. Alongside the bus, dressed in blue uniform and a standard issue fur hat, hand on truncheon and everything, strides a cop. We hear Matthias talking to him; Matthias can speak passable Russian, but how understandable passable Russian is to a Ukrainian isn’t clear. After a few minutes Matthias comes bursting into our bit of the bus, muttering “Sheiße!” in his native tongue. He fishes around behind one of the seats and produces some paperwork, then returns to the cop. A few more minutes and he calls for Simon, who has just bedded down for a much needed few moments’ kip. Simon sleepily emerges and they all troop outside to look at the trailer. After a while, and a lot more linguistically challenged negotiation, we are on our way again.

Five minutes later, as meticulously timed by the iPhone of our lighting director Argy, the bus slows to a halt again. To save time, just re-read the above paragraph. Actually: read it six times. There are a few subtle differences on each occasion: the varying reasons for being stopped – the trailer isn’t allowed, the bus isn’t allowed, the tyres are incompatible with Ukrainian safety laws (which, no offence intended towards Ukrainians, would eliminate 90% of the vehicles we saw in the country); the interaction of the policemen themselves – on one occasion the guy screams at Matthias for a few minutes and then storms off, another time the bloke comes into our lounge and has a perfectly civil, calm exchange with us, although sadly neither party can understand the faintest word each other says. Matthias manages to decipher an unusual idea from another of the policemen, that we should simply leave our trailer of gear behind and press on to Kiev without it. I consult my Ukrainian phrasebook for a sentence along the lines of “Um, this whole leaving-our-trailer-of-gear-in-the-middle-of-Ukrainian-nowhere thing isn’t really gonna work for us, dude” – but strangely enough I’m left short.

Predictably, the ultimate suggestion for the end of the impasse is money. €500, €800 – that kind of figure. Not a tour-ending, life-threatening sum, but how many times are we to be asked for the same price on the same road? If we pay one cop, does that mean the next one won’t ask for it? Who knows. Simon skilfully wriggles out of the first couple of deadlocks, but after half an hour, we have progressed some ten kilometres. We were supposed to be loading in the venue 90 minutes ago. Simon’s been on and off the phone to our Kiev promoter, and by the third stop Simon simply hands his phone to the cop, whereupon our man informs the policeman in a frantic voice that he has to “let this fucking band through immediately – they’re playing a gig for the Prime Minister this evening!” As Guy notes, “if you’re going to lie, make it a bloody big lie.” Amazingly, the story hits home and we are allowed through with little argument from the next three or four cops. Within fifty kilometres they have stopped bothering us whatsoever. 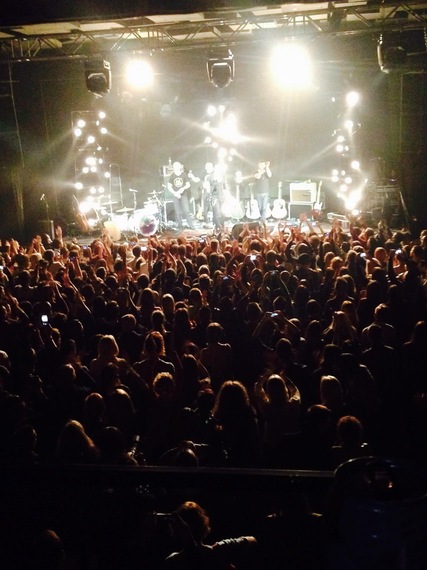 It’s important for me to stress that, once we arrive in Kiev, everything is absolutely marvellous. The crew and the venue are hardworking, charming and enthusiastic, the venue itself, Sentrum, is big and possessed of a pounding sound system, and the 800 or so punters who come to see us are almost embarrassingly welcoming and delightful to play for, both for Fink and for our special guests She Drew The Gun. We leave Kiev in the wee small hours not with a feeling of, “crikey, glad that’s over with” – but with a strong desire to return and do it all again, hassles or not. And it’s just as well we’re in such a good mood, because we need it to carry us through the next border experience: a brutal 12 hours into Poland during which, among other things, we’re asked to surrender €8000 (we didn’t) and TM Simon strongly considers winding up the day in a nearby padded cell, muttering “carnet… carnet… must… stamp… the… carnet” deliriously to himself (he didn’t). 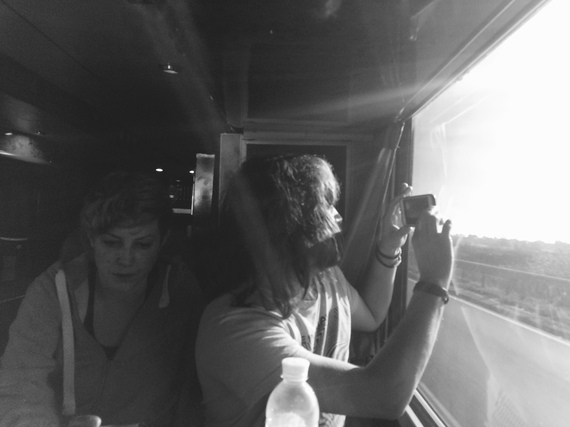 She Drew The Gun, admiring the post-border view and considering possible career change

Outrageous, you might think; and we ourselves have certainly been prone to thinking same. How dare they screw us around in this way? We’re legitimate showbiz attractions of quality and note, and we deserve better. And yet: to allow your mind to go down this route, if you wish to continue being a touring musician for a living, is a surefire route to perpetual frustration and anger. Sometimes it’s tempting to overblow – in the way only rock musicians can – the importance and status of these tours we embark upon, to the point where they become dressed up as something terribly sophisticated, modern and groundbreaking. But really, in the end, we are just travelling performers, moving from town to town, plying our trade, singing songs to crowds of local people, who pay us. We move on to another city and do it all again – just as they did in Victorian times, Shakespearean times, medieval times, Roman times, and so on. We use a nightliner bus where they used horses and carts, and we need electricity to perform the shows – but there the differences largely end. We are still guests in someone else’s venue/town/country, and we’d better do like the authorities want us to do, or things could get tough. And along the way, we will encounter tricky characters – just like the sheriffs and highwaymen of days gone by – who might be inclined to pass the time by making life that little bit harder for us, or shaking us down for a few thousand quid. In the past we might have leapt from our carriage and seen them off with a pistol or two, or a swordfight or three. Nowadays we use a mobile phone, where the voice of an angry promoter spinning a few quality yarns might do an equally effective job. As the expression goes: plus ça change, plus c’est la même chose. We’re just a part of a grand old tradition, and rather than sending ourselves truly bonkers, that’s probably the best and safest way of looking at it.