I’ve Been Detecting You

Now, before we continue, I ought to admit I’d be lying if I said much of my time and brainpower had been spent pondering the travails of The Pigeon Detectives since Take Her Back dropped off the XFM playlist in 2007. It’s possible that when I last heard a note of their music, Twitter had only just been launched, Spotify was but a cyber-itch in some Swedish techie dude’s pants, and even Facebook was still something teenagers would occasionally be seen dead using. To be perfectly honest, I’d more or less assumed that TPD – if I may call them that – had probably jacked in detecting pigeons and started looking for something else, like maybe a day job. Turns out they’ve released three further albums, the fortunes of which I won’t dwell upon. Let’s all just pretend the last ten years haven’t happened and freshly examine the silver disc, sorry, I mean cluster of megabytes cannoning out of my knackered JVC speakers as I write. For what reasons, then, should you waste your precious bandwidth on The Pigeon Detectives? I counted at least seven. Let’s go:

1. They write real melodies. It’s one of my pet peeves that when most people observe “ooh, they’re so melodic” about such-and-such a band, what they really mean is “ooh, they harmonise really nicely with the chords”. Not so Matt Bowman and chums. Broken Glances is stuffed with proper, carefully constructed, independent melodies, and that can only mean one thing: earworms. My whole trip to Shoreditch and back just now was accompanied by the chorus to Lose Control, and the refrain of A Little Bit Alone squirmed around my head all morning until I had to play an entire side of an ELO album to purge it. 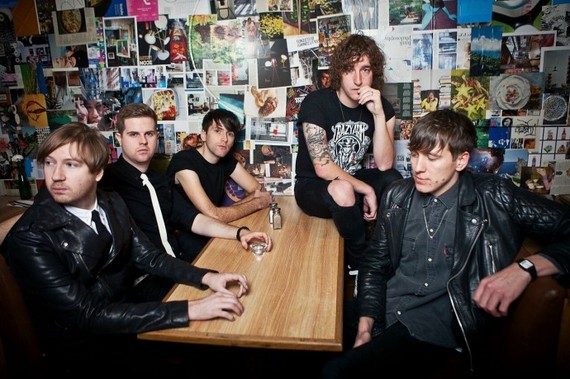 The band had been waiting for their breakfast so long, they were starting to sit on the table. (photo: Sonic PR)

2. Enemy Lines is the indie-stomp comeback single of your dreams. Don’t be fooled by the tranquil guitar intro. It soon builds into the kind of roaring anthem Steve Lamacq still has wet dreams about. Oh, and hats off to the guitarist for ripping the shit out of the arpeggio from Tears For Fears’ Everybody Wants To Rule The World and making it his screaming, overdriven own.

3. The drummer is awesome. Yeah, yeah, I know… one drummer sniffing another drummer’s arse, and all that. But Jimmi Naylor (nice name, by the way) actually performs a function other than driving the beat along. Wolves, for example, was a – dare I say it – slightly plodding opener before the counter-intuitive beat started. He gives it some top-notch Bloc Party on Stay With Me, and stamps some credible reverse-authority on Falling In Love by staying out of the picture entirely, save for a few cymbal flourishes.

4. They wear influences on their sleeves. They’re clearly a band of music fans, and aren’t shy about showing it. But far from recycling the predictable Who and Small Faces moments they’re obviously capable of, their range extends to more recent, unexpected fayre, with lashings of electronica and post-rock. Sometimes I find myself behaving like a wine expert while listening: “Ahh… I’m getting flavours of Teleman… and maybe a hint of Daughter and… yes! The XX. What vineyard is this? Would this go well with bourguignon, sorry, I mean hotpot?”

5. They’re not afraid to experiment. While the album sounds admirably coherent, they’ve managed to stuff several different sonic ideas into each song, from the progged-out trippiness of Munro to the flanged-out noisiness of Postcards. This was evidently an album TPD had fun making, perhaps the better for not having the fear and pressure of hit-making dragging them down. 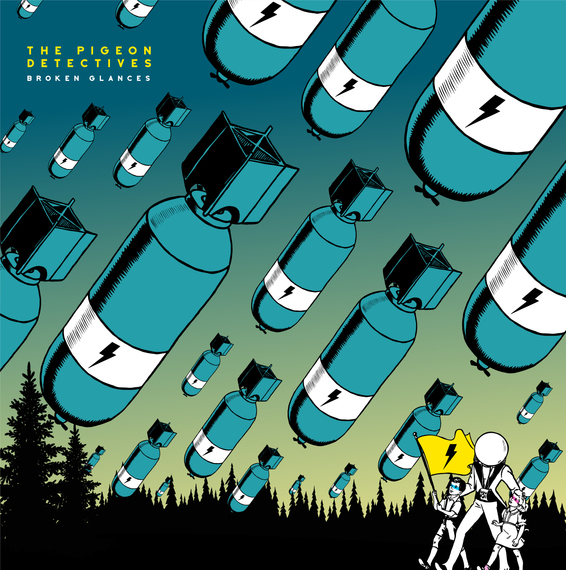 6. There’s emotion in them there hills. For all their laddish exterior, the Pigeons aren’t averse to showing the cracks in their armour. A Little Bit Alone sees Matt Bowman coming on like a humble Ian Brown, with genuine yearning in his voice as he calls for the one he’s missing, while Falling In Love delivers a convincing slice of death-of-the-party gloom: “Go out every weekend,” Bowman croaks, “repeat all the things we did before and all the things we did the time before.” Know how you feel, buddy.

7. They haven’t completely forgotten where they came from. I don’t mean geographically – although to be frank I’m pretty certain they haven’t forgotten that either – but that they bubbled up from the happy, guitary, shouty indie rock constituency. True, there’s no Take Her Back on the record, but with the crunch of Sounding The Alarm and the Charlatans-esque lollop of Change My World(the record’s sole conventional indie track), they betray an honesty and a welcome lack of pretention that certain other noughties bands from Leeds might do well to heed. (Miaow! Did I say that out loud?)

So what do you do when you’re The Pigeon Detectives? Well, you don’t doggedly attempt to recapture past glories. You don’t ill-advisedly go for the corporate pop jugular. You certainly don’t phone it in, and you don’t pretend to be someone you’re not. But you do energetically strive for something new and something better, and, by the refreshing and engaging sound of Broken Glances, you do the only thing you can do: make a bunch of songs that you yourself most definitely want to listen to. It may not be the most startlingly original album released in 2017, but you’ll be hard pushed to find another indie rock record that so relentlessly believes in itself. Here’s hoping many people out there believe in it too.

Broken Glances is out now