Rock Festivals In The Afterlife

It started with a daydream. It might have been while doing something particularly boring, like filing my tax return, or driving for an hour on the M11. Equally it could have been a drunken group conversation between watching bands at Glastonbury. Possibly both. Anyway, the musing was: imagine if you were putting on a festival, and you had any pop act that’s ever existed at your disposal?

Let’s not worry yet about where, or indeed when, this is supposed to be. Just think. Absolutely anyone you like. The rich history of rock’n’roll bands and singers, boiled down to a line-Up, governed by the glorious hierarchies and categories of the festival bill. Who would kick off the day with a bang? Who would play on the quirkier stages? Who’d be jostling for position in the early evening? Who would headline? Here, the great questions of pop’s quantitative and qualitative history would finally be answered. Who’d draw the greater crowd: The Beatles or Oasis? Bob Marley or Bob Dylan? ABBA or Taylor Swift? Michael Jackson or Elvis? Who’d be the better band: Nirvana or The Jimi Hendrix Experience? The Clash or Beastie Boys? Who’d be best for chilling out on the Sunday afternoon: Elton John or Marvin Gaye? Otis Redding or The Carpenters? And could The Smiths finally reform, perhaps with Mike Joyce playing inside a bulletproof-glass pod?

There it was. Dead. With that one word the seeds of misadventure were sown. What if, just what if… this festival was in the Afterlife?

A rock festival in the Afterlife. It sounded to me like the basis for a jolly good novel.

Instantly, a hundred questions popped into my mental inbox. What was this place? Was it heaven, hell, or something in between? And who was organising the festival? (Maybe the organiser could tell the story.) But why would anyone bother organising a rock festival once they’d reached the Afterlife? Why would anyone want to play a festival once they’d reached the Afterlife? I didn’t know, and frankly what had started out as a nice spot of drinking banter was now getting far too complicated. I parked these convolutions at the side of the idea motorway and the subject didn’t cross my mind again until David Bowie died.

Now, I blogged about Bowie’s death at the time, which was my very first experience of a blog being read by more than four people, so I won’t dwell on it here. But the impact was undeniable. It struck me for the first time – and was rammed home even further when Prince bowed out a couple of months later – that there’d come a day when more heritage rock acts from my lifetime would be up there, than down here. An obvious point perhaps, but at any rate: this “festival in the Afterlife” idea came charging back into my mind. Trying desperately not to overthink it, I sat down to write. 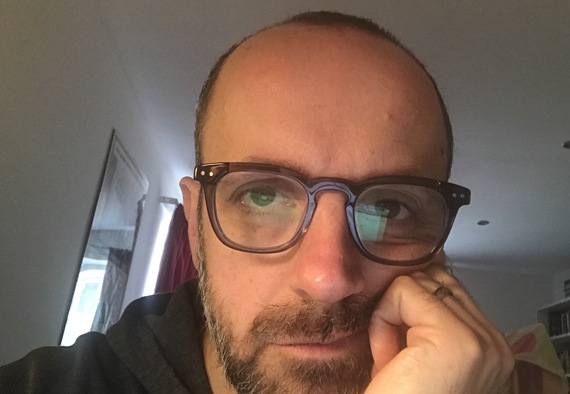 Me sitting down to write.

Ha ha. “Sat down to write.” Right. A simple phrase, massively simplifying the insane pummeling my brain received over the next 48 hours. See, it’s one thing to think, “oh yeah, I’ll write a story about a rock festival in the Afterlife” – but as soon as you reach the end of practically the very first sentence, the enormity of the task hits you. You can’t tell any element of the story whatsoever without deciding a million things. How does this strange Afterworld work? Are there jobs, money? Is there free will? Or is it all run by some silent governing force, like a slightly cuddlier version of The Matrix? Is God about?

I distinctly remember walking down my street after the first day’s writing session and bursting into bewildered, uncontrollable laughter at the preposterousness of the job I’d undertaken. Sure, I was looking forward to piecing together an amazing festival bill and getting my teeth into the characters and the dialogue, as always, but when the rule book is totally empty and only you can fill it, it’s a barmy mixture of exhilaration and fear that surges and bubbles inside you. Being a musician, I compare any creative process to being in a rock band, but if you have an outlandish idea in the rehearsal room it’ll be a maximum of 20 seconds before your bandmates either say “that’s awesome, man” or “that sucks, dude.” With a novel, you don’t get anyone else’s opinion until roughly four months and seventy-thousand words later, and the giddy height from which to potentially fall is actually – genuinely – quite frightening. 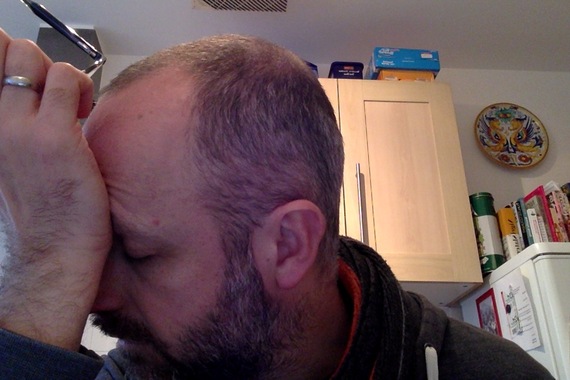 Me being frightened by the giddy height

But hey. Failure is not an option in this crazy literary town, and thankfully my finished novel was quickly read by an excellent friend who confirmed that I had indeed lost my mind, but in a good way. So everything was finally decided, and the story has now been told. The festival is called Felix Romsey’s Afterparty, as is the book. The organiser is Felix Romsey, a spiky but charismatic impresario. The narrator is his amiable but awkward assistant Adrian “Podge” Jones. This year’s headliners are John Lennon and Whitney Houston, with supporting attractions Elliott Smith, Minnie Riperton, Serge Gainsbourg, Michael Hutchence and an acoustic set from Kurt Cobain, among many others. The story is set in 2016, which enables the unusual device of famous people popping up in that world who had recently left this one – of which, as you’ll know, there were many. To discover everything else, well – to paraphrase the final line in OMC’s mega-annoying-but-with-hindsight-quite-good 1996 hit How Bizarre – “Wanna know the rest? Buy the book.”

This is the third time I’m written a novel (well, fourth if you count the one that’s still a stack of A4 sheets my daughter uses the other side to draw pictures on) but I think it’s the first time I’ve written a book I can adequately sell in five words. Rock festivals in the Afterlife. I said these five words to my mother on the phone just now, she laughed and said “Oh, goodness!” A reaction like that makes it all worth it. Everyone’s a winner, baby, as Hot Chocolate’s Errol Brown will almost certainly be singing onstage at Felix Romsey’s Afterparty.