TEN EARLY 90S INDIE SONGS THAT SAY IT ALL

In 1988, a school friend lent me Electric by The Cult, and my love of alternative, or indie, rock was born. With the assistance of my publication of choice, Melody Maker, my eyes were opened to an increasingly large list of often ridiculously-named bands. The movement’s zenith for me will always be the early 1990s; but time (i.e. the press) has not been kind to the memory of the indie music from this period. Sometimes, one is given the impression that the only indie prior to Britpop was composed and performed upon the instruments of The Stone Roses, Happy Mondays and The Smiths. Not so. Here, then, are 10 records to which I would draw your urgent attention, accompanied by a cheeky little Spotify playlist including all but one of the songs.

n.b. 10 songs is not very many, so in order to keep my procrastination to a minimum I stuck to music from the UK and, in one case, Ireland. I might do a rest-of-the-world list another time.

Amid all the long hair, the stagedives, the torn T-shirts and moshpits of late 80s/early 90s alternative rock, there were a couple of bands who managed to master the old-fashioned art of penning a decent song or two. The Wonder Stuff achieved this end so convincingly, they could even justify augmenting their standard line-up with a violinist on some tracks and manage to not sound like they were decorating a cow pat with a bunch of daffodils. Containing some of Miles Hunt’s more memorable lyrics (“Is that a smile which hangs beneath your nose? / Or are your eyes so wide they pulled your mouth into a stupid pose?“), Circlesquare is a glorious slab of unexpected melancholy from a band whose song titles alone – It’s Yer Money I’m After, Baby, Give Give Give Me More More More – had hitherto failed to paint the picture of particularly sensitive souls. In fact, like the school bully who surprises everyone by suddenly dating the geeky girl who’s always in the library, these moments of sadness actually captured the band at their best.

“They could have been massive,” their manager once said to me, his sad eyes gleaming with never-to-be-earned-pound signs. And after listening to the breakneck slice of nuclear-power pop that is Easy To Smile, you might well agree. Sadly, the Senseless Things fell down the gap between those two most famous of alternative rock sofa cushions: Grunge, and Britpop. Simply put, if you played a guitar in early 1992 but weren’t from Seattle, no one gave a shit, and by the time Suede, Blur et al had ridden in on their white horses, the Senseless Things had already been binned like something smelly you might find at the back of the fridge. But bassist Morgan Nicholls has gone on to become the “fourth member” of Muse, so there’s a little bit of a happy ending.

By 1990, indie/alternative music was plentiful and fighting fit, but from a cold, hard industry perspective it’d been a while since it had thrown up (if you’ll pardon the expression) anything as big as U2 or even The Smiths. Consequently, expressions like “the greatest songwriter of their generation” were being continually slapped on the latest hapless newcomer by the music press in the hope that they might magically morph into Elvis Costello. But with the Power Of Dreams’ Craig Walker they almost got it right. POD’s debut album Immigrants, Emigrants and Me is an eloquent hymn to lost youth and things being generally a bit wrong, the songs confident and performed at a furious pace, with the effortless 100 Ways highlighting that most infuriating of romantic debates: “When you said yes / did you mean no?” It’s well worth a spin, if you can find it. Fact: I lost half an inch off one of my front teeth in the mosh when POD played Camden Palace. Still haven’t got it back. 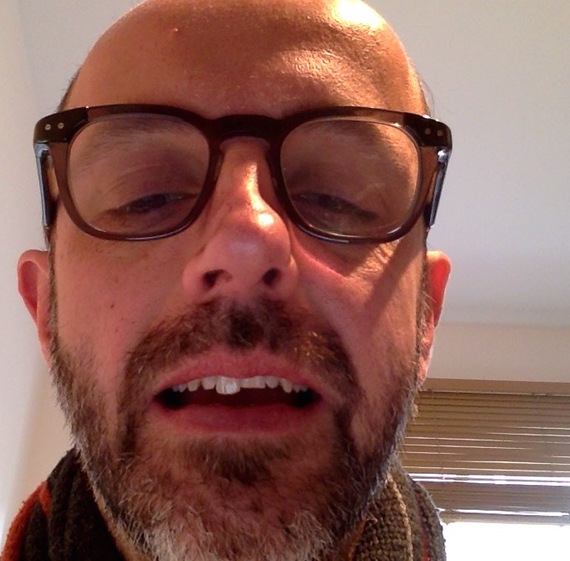 My wonky front teeth. Power Of Dreams: it’s all your fault.

4 Carter The Unstoppable Sex Machine – Midnight On The Murder Mile

A lot of twaddle has been written about Carter over the years. That they were a glorified novelty act, that they wore crap shorts, that their drum machines were twatty, that their lyrics were annoying, that the best thing they ever did was punch Phillip Schofield on live TV. Only some of these things are true. What’s definitely, and surprisingly correct, is that the music of few early 90s indie bands has weathered as well as Carter’s. Perhaps this is because they always sounded a bit crap, like two really angry people trying out a budget electric guitar and a Bontempi keyboard in the Streatham branch of Cash Converters. But the words were something else. Stuffed with as many mashed-up idioms, pop-cultural puns and London place names as they could squeeze in, the songs still managed to be wistful, poetic, hilarious and suffused with the sort of we’ve-all-had-quite-enough-of-these-fucking-Tories anger that overflowed in London by the winter of 89/90. In truth, I could have picked any song off their 1990 debut 101 Damnations, but Murder Mile is unique in its depiction of a paranoid, post-nightclub cross-borough trudge home, before the days of mobile phones, Oyster cards and night buses that ran more frequently than every four hours. Arctic Monkeys’ Alex Turner hadn’t even started school when Carter were already enjoying their heyday, but if a nearby adult managed to sneak a Carter song or two into his playtime listening, I wouldn’t be remotely surprised. 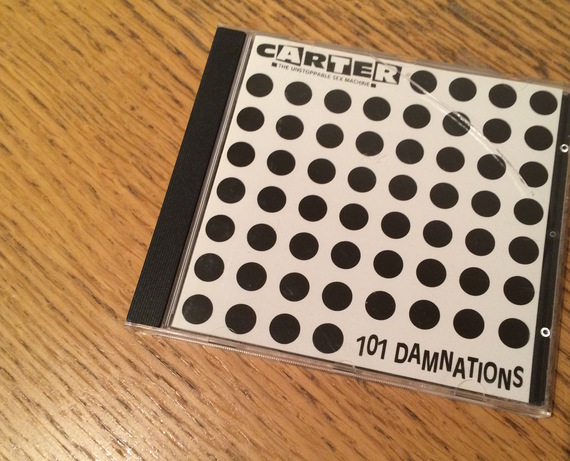 Carter. I used to have it on vinyl, now I don’t. Please note obligatory bashed-up bit.

5 Eat – Bleed Me White (Sadly not on Spotify)

When encountering a fellow early-90s-indie kid, few moments in the conversation are as sweet as discovering you were both fans of Eat. Led by statuesque Italia Conti alumnus Ange Dolittle, Eat were erudite, multiculturally influenced, musically capable and hopelessly unsuccessful, despite 1993’s Epicure being a well-produced showcase of some wonderful songs and Dolittle’s chanting/toasting vocal style. Sometimes I find myself musing that if Eat had instead emerged in 2005 with appropriate haircuts and an effortless slab of energetic swamp rock like Bleed Me White, they’d have probably a) been huge, and b) made Maxïmo Park look like Status Quo.

Ride almost had it all: dreamy good looks, floppy hair, a nifty way with effects pedals, a drummer whose every fill sounded like someone throwing a drum kit down a flight of concrete stairs, and a contract with the ultra-cool Creation label, which automatically airlifted them out of the undignified “T-shirt” bands bracket. If only they’d also had the songs. Somehow the atmospherics they managed to conjure up were never quite matched by a sure grasp of, y’know, a memorable melody and a decent lyric, but on early tracks such as Like A Daydream it simply didn’t matter; the relentless drive, luscious harmonies and twangy Rickenbackering brought to mind the music The Byrds might have made if they’d relocated to suburban Oxford for six months and taken a lot of speed.

7 The Charlatans – The Only One I Know

Having been something of a Madchester skeptic, it pleased me no end when a group who’d thus far been labelled bandwagon jumpers scored a bigger hit than almost all their nemeses put together. The Only One I Know sounded like a real pop song: an unapologetic, chunky, groovy, catchy cracker of a tune that seemed to owe much to the more funky corners of the sixties (The Zombies, The Creation, Spencer Davis Group). Plus, refreshingly, the lead instrument was the organ, which no-one else was playing at the time apart from the Inspiral Carpets, on whose recordings it always seemed to fall on the wrong side of quirkiness, good though the Inspirals could be. In many ways, The Only One I Know was The Charlatans equivalent to Blur’s There’s No Other Way: a promising early Top 10 hit, to be followed by a period best described as “difficult”, preceding a welcome return to success. One of the UK’s most consistently rewarding bands, give me The Charlatans over The Stone Roses any day of the week.

Of all the so-called “T-shirt” bands, the name that to this day still generates the cruellest sniggers is surely Ned’s Atomic Dustbin. To be fair, any rock musicians who considered “Ned’s Atomic Dustbin” as a title for a musical venture yet simultaneously wished to be taken seriously were probably masters of their own fate. But Ned’s had their moments, most of them crammed into debut The Ingredients EP, of which Grey Cell Green was the finest track: an urgent, pounding rush of “Look Ma, I’m in a band” excitement, the twin bass guitar parts sounding less a gimmick and more like a proper innovation, genuine yearning audible in Jonn Penney’s “Ian Curtis if he was from the Black Country” baritone, and a drum pattern so busy it could almost be used for a DJ Shadow track. Actually… that’s not a bad idea… 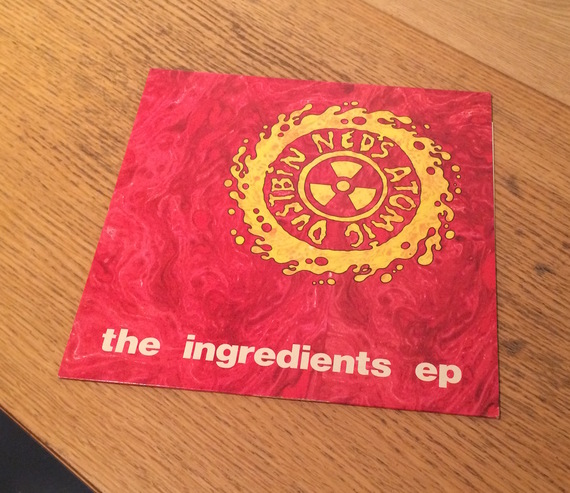 Ned’s. Still a contender for the greatest rock logo of all time.

Before The Avalanches, LCD Soundsystem and 2 Many DJs, the small West Midlands town of Stourbridge had produced its own self-referential, ironic and musically regurgitational mash-up merchants. Rejecting their initial drums/bass/guitar formula before they’d even released their debut album, PWEI struck out on a more adventurous and culturally stimulating path, peaking with 1989*’s thrilling (and surprisingly well-aged) This Is The Day, This Is The Hour, This Is This. Can U Dig It? was concurrently its most irritating and exemplary moment, with the band reciting a list of their pop cultural turn-ons (“We dig Marvel and D.C. / We dig Run-D.M.C. / We dig Renegade Soundwave and AC/DC“) to a squealing, messy backdrop of guitar solos and TV theme samples. In the methods the band espoused, and even (especially) in the name they chose to trade under, Pop Will Eat Itself predicted and predated the mash-up/anything-goes ethos of the 2000s by a good 10 years. One of their two vocalists, Clint Mansell, is now a noted film composer; the other, Graham Crabb, continues the PWEI brand, admirably steering the music towards a darker and more fucked-up place than ever.

*Yes yes, I know technically speaking this makes it 80s indie. But I bought my copy in 1990. So there.

No list of early 90s indie would be complete without a James record, and despite hearing it some ten billion times in my university years alone, it has to be this one. In the face of such overplaying it’s easy to forget what a toweringly brilliant song it is, with hints of anxiety (“My life is out of control / I believe this wave will bear my weight, so let it flow“), stirring sentiments of inclusion (“Those who find they’re touched my madness / Sit down next to me“) and a grand, confident delivery that provided the band with an anthem to rival even the likes of R.E.M.’s Losing My Religion. Singer Tim Booth wasn’t without cynicism about this – “Now you’ve heard the hit single you can all go home,” he remarked during their 1991 Reading Festival headline slot – which could be why James always remained outsiders. But this was probably to their credit: the ascendence to the pompous Simple Minds mega-league, predicted by some of the music press, never happened, and thank God.

More of my early 90s indie rantings, albeit in fictional form, can be read in my novel The Alternative Hero…