Three Days In Austria With Fink…

Fink have just been on tour in Austria. Actually we’ve just been on tour in many places. If you follow us on Facebook or Twitter etc., you’ll probably know all about it. We will have harangued you on a daily basis. Snapshots of local tourist attractions will have appeared in your news feed, often accompanied by vital information about where to buy the last remaining ticket. Anyway, you’ll be glad to know that our tour is now over and I have no interest in directing you to buy anything at all – only to sit back and look at our Viennese friend Matthias Hombauer‘s jolly nice photos of the three days he spent with us as we belted across his home country, leaving approximately two thousand people fractionally more deaf and hopefully entertained. 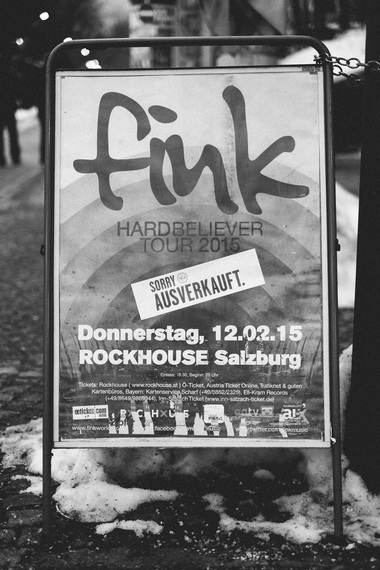 That’s right, Ausverkauft. Every band wants this word on their tour poster when they play Austria. You can probably guess what it means. Our Austrian promoter Alex is bloody good at his job and the word Ausverkauft ended up on all of our Austrian gig posters, including when we played Vienna last year. That foamy stuff on the floor is not remnants from our bus driver’s recent bus wash, but snow. Most of the Salzburg snow had melted by the time we got there, but don’t you worry, you’ll be seeing some more snow in a moment. 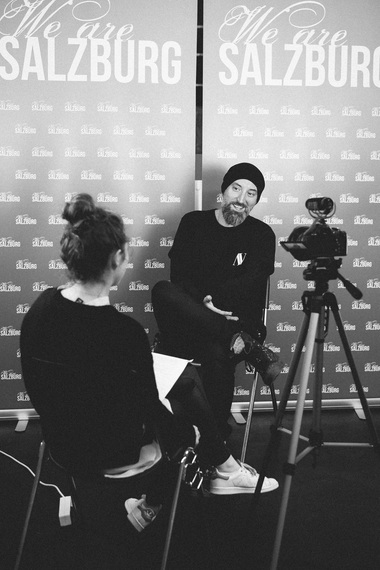 Here is Fin doing one of the things he likes doing most: talking. If he was given the choice between only talking or only singing for the rest of his career, I honestly don’t know which one he’d choose. Anyway, it’s just as well, for Fin gets asked to do about ten interviews a day when we’re on tour, most of which he turns down or he’d have no voice left for the gigs. Here he seems to be explaining something. Judging by the smile on his face, I suspect he’s not describing how he stopped being a DJ and started writing songs for the 975th time. 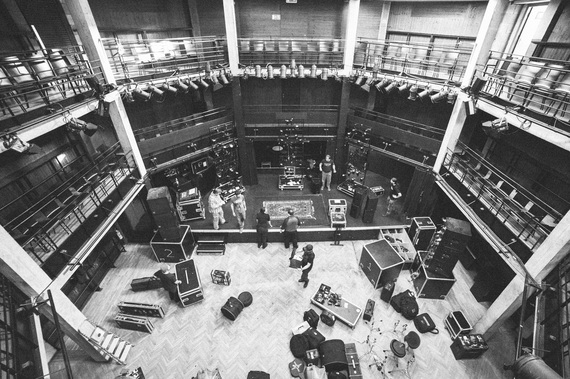 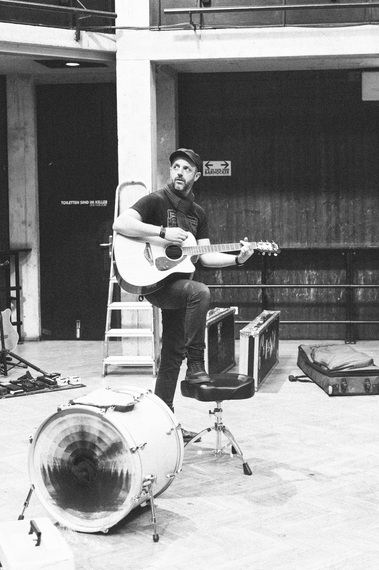 This is me, playing the guitar. I seem to have forgotten to set up the rest of my drums. I’m sure someone will come and remind me soon. 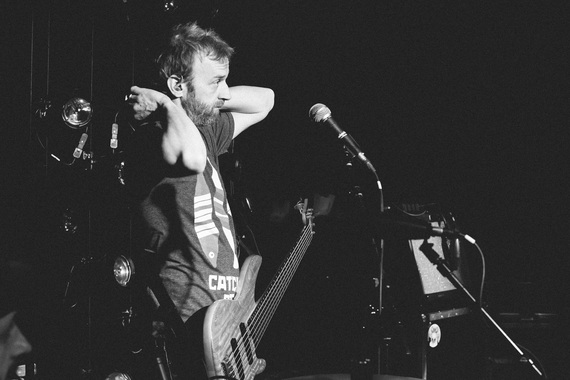 Guy, mid-soundcheck. He’s looking a little bit perturbed. I’ve a feeling Rob has just asked him to turn the volume down on his bass amp; another daily occurrence. You’ll notice that Guy is wearing his A38 T-shirt, a souvenir from the legendary waterborne club in Budapest which we played a couple of days previously. You’ll also notice that although Guy is the bass player, he manages to have six strings on his bass guitar. That’s because Guy boldly goes where no bass player has gone before. 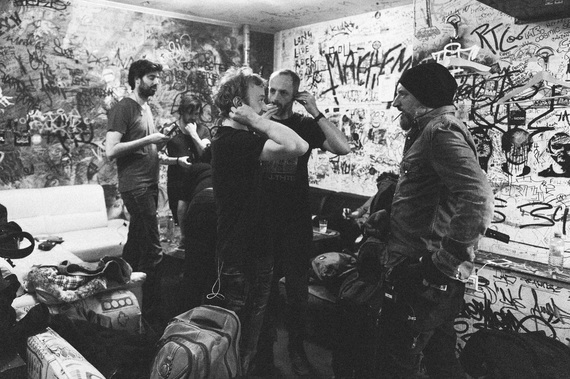 Ten minutes until Salzburg showtime. We’re inserting our monitor earphones and other such pre-gig essentials. This dressing room is fairly typical in that every inch of the walls is plastered with band stickers and indescribable graffiti, and there are bags all over the chairs. Most of our band and crew suffer from a strange affliction which causes them to place bags on every visible seat, meaning there is rarely anywhere to sit. Also in this picture are the two other musicians in the band, Ruben Hein (piano) and Chris Nicholls (electric guitar). Ruben and Chris are great players and awfully nice people, good-humoured and even-tempered, although Chris is probably a bit pissed off in this picture because one of his ears stopped working in Bratislava and this was before he got a nice Austrian doctor to syringe it. Ruben on the other hand is probably quite happy here, perhaps because he’s looking forward to a morning’s skiing tomorrow. I can reveal that this didn’t actually happen in the end, as our bus arrived in Innsbruck four hours late and Ruben went totally mental. 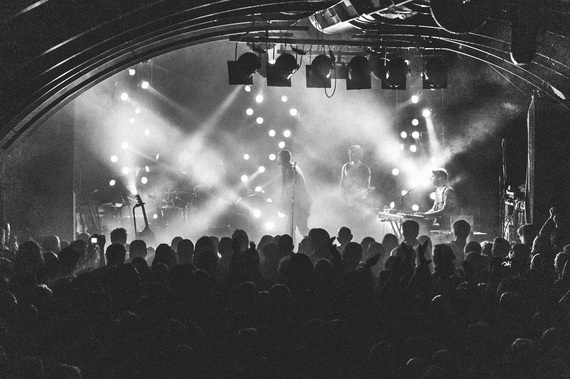 The Salzburg show. Rockhouse is a long, thin, tunnel-like venue, so I’m not entirely sure how Matthias got this shot. Maybe he was hanging from one of the lighting trusses. Anyway, I was trying to work out which song we’re playing here: everyone seems to be looking at me, so it could be the outro of Yesterday Was Hard On All Of Us when traditionally only I know where the end comes, and I have to glare at everyone when it’s time to stop. 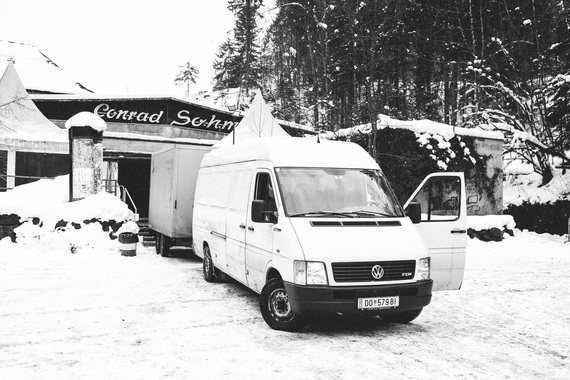 Here is our trailer arriving at the Conrad Sohm in Dornbirn. “What?” I hear you cry. “I thought your trailer got pulled around by a pimped-out rock’n’roll nightliner tour bus?” Well, yes it does, but this unique venue can only be reached via the Bridge of Death over a mountain stream, and the bridge is not quite strong enough to have a double-decker enormo-vehicle drive over it. (See the liner notes to our live album Wheels Turn Beneath My Feet for the story of what happened last time we played this place.) So the venue’s own sturdy Mercedes mountain-rescue-mobile comes to our aid. Look carefully and you can see a snow chain round one of the tyres. So we reach the Conrad Sohm itself, and the whole place is so completely covered in snow it resembles something you might find at the bottom of my mum’s freezer… 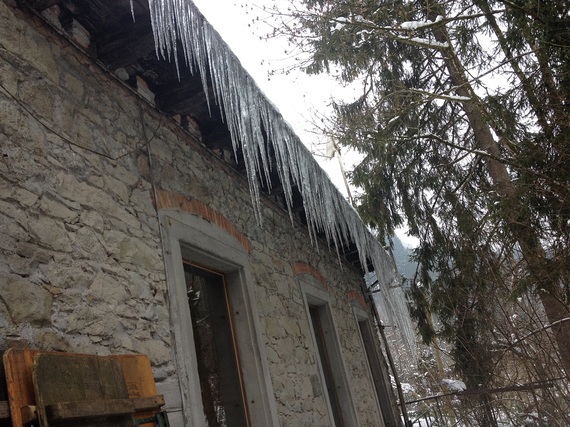 … with icicles, and stuff. (note: this photo was taken by me and not Matthias. You can tell because it has that unique iPhone 4 quality.) 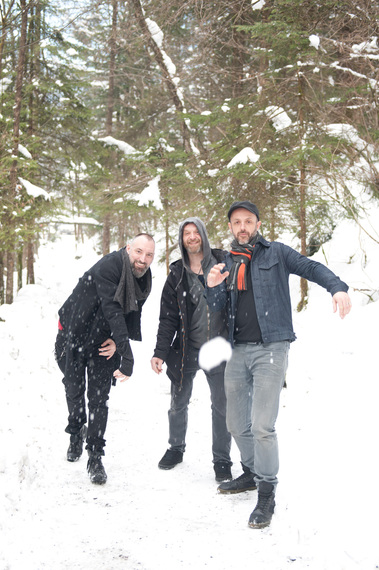 All things considered, we thought we might as well throw a few snowballs. 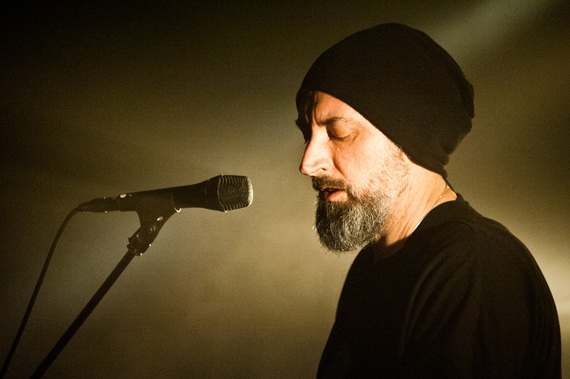 Back to business. Fin wearing this hat probably has little to do with how cold it is outside. He usually starts every gig with it, and then peels it off mid-set when his brain starts to fry. This photo also shows his trusty Neumann microphone which he never goes anywhere without. 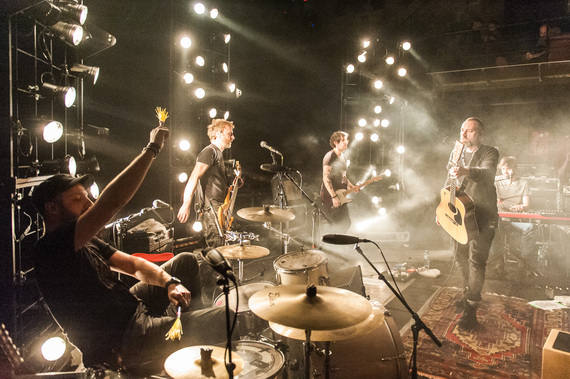 The end of Looking Too Closely, I reckon. I often hold my brushes like this when we reach the climax of a song, making me look a bit like I’m directing airline traffic. These, by the way, are the cheapest and best plastic drum brushes in the world, Zok Blackjacks, made by some dude in Hampshire and longer-lasting than pairs six times their price. At least, they are once you cover them with life-threatening amounts of gaffatape. Also noteworthy is the “F” on Fin’s guitar, meaning “Festival” Martin, as it’s the one guitar he can rely on to not give him walls of feedback at a festival. 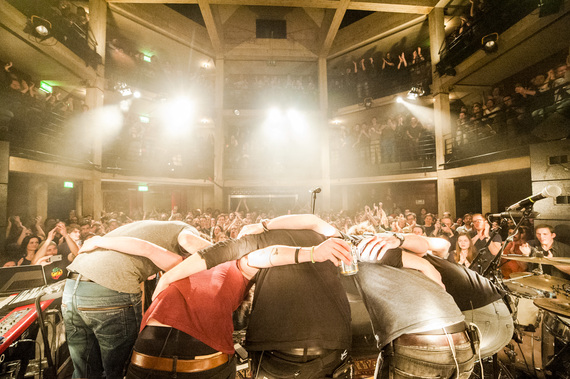 Our now notorious “3,2,1” bow at Innsbruck’s Treibhaus. Notorious because frequently we’re all hard of hearing by the end of a show, so not everyone catches me hollering “3,2,1!” and we all bow at different times. Still, we seem to have managed something approaching unison here. This was a nice gig, one of my favourites. See what a great three-level venue it is; there is even some audience behind us. 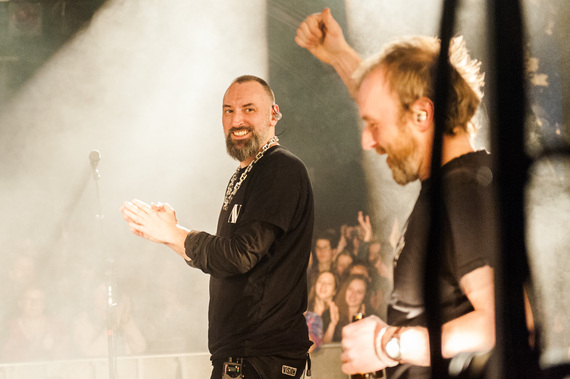 Ahh, what a nice photo. Fin and Guy have been hanging out together for years and years, since long before they started to play music together. Also in this picture is Fin’s invaluable mojo chain, made entirely of ring pulls. He claims that our gigs’ qualities fluctuate according to whether he wears it or not. I haven’t done a detailed examination of this theory yet. Maybe next tour. 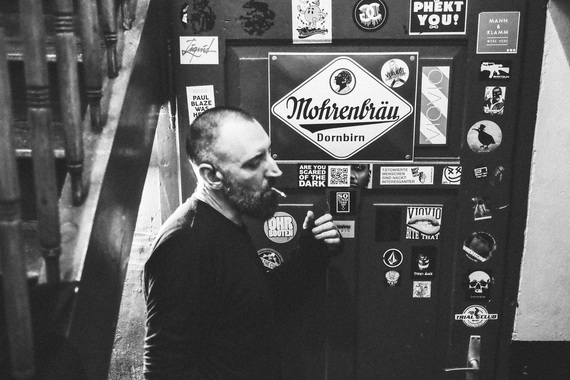 A well-earned ciggy after the show. Dornbirn, Salzburg and Innsbruck: you rocked. We’ll be back.

Fink are having a small rest right now but you can find out what happens next at http://www.finkworld.co.uk/

Matthias Hombauer is a full-time music photographer and the founder of “How to Become A Rockstar Photographer“, a platform where he teaches you how to start your concert photography career. All images here by Matthias.