Transporting Me Temporarily Into Another Life – My Albums Of 2016

This time last year, I wrote in these very pages that my desire for music in 2016 was for “something that confuses the shit out of me while educating, entertaining and transporting me temporarily into another life, so that I remain incapable of even cooking my dinner.” Well, if there’s one thing that we’d have wanted during this strangest of years, it was to be magically teleported somewhere else, uncooked dinner or otherwise. I’ve tried to find a common thread in my Albums Of The Year list, and although a subtle one, it definitely seems to be each record’s ability to astrally project me into another galaxy while I listen, some more effectively than others. But each is raging proof that, whatever else may be disintegrating around us, music is still here for us, still has our back, can still deliver us from all – or perhaps most – ills. So here we go… in diplomatic alphabetical order…

This album has soundtracked my world since I chanced upon it in June. There are so many good things to say about it, I barely know where to start. Monika Brodka is the sort of auteur who doesn’t come along too often: capable of moulding an entire creative universe for herself, where music, lyrics, pictures and videos are all part of the same wonderfully unified and deeply original force. Within this, she can do low-fi punk (My Name Is Youth), post-punk (Horses), pre-apocalyptic tension (Can’t Wait For War), gothic oddities (Holy Holes, Funeral), latino folk (Santa Muerte), even off-kilter bubblegum pop (Up In The Hill), all of which manages to call to mind long, lonely drives across the haunting and slightly foreboding landscapes of the artist’s home, Poland. I have a funny feeling that, come 2018, there will be rather a lot more people listening to Brodka.

Fucking YES… American indie-rock finds its fire again. Listening to the Car Seat Headrest album reminds me of the first time I heard Weezer, or Beck, or even Elliott Smith, but with none of the latter’s occasional tendency to self-aggrandise, nor the former’s brattishness, and with a sense of humour that the medius has largely abandoned. A thumping, noisy but languid treat, replete with some absolutely ace songwriting. But the drummer needs to tighten his snare, it sounds like a frigging box of marbles (that’s probably the whole point).

Chords and melody. The two enigmatic ingredients to the basic music of a song. I always find it amazing when music writers through the years rattle on about songs being “melodic” when they’re actually nothing of the kind. When a songwriter manages actual, true melody, it reaches out to grab you by the emotional goolies like nothing else. Douglas Dare is one such songwriter. That he then fuses these melodies to the most inventive, exploratory of lyrics is enough in itself to seal the deal, but – rather like getting yet another large Christmas present when you’ve already been given ten – you also have Fabian Prynn’s visionary beats and production to contend with. Aforger is everything I wanted Whelm‘s follow-up to be: harder, bolder, more adventurous and eclectic, but with Douglas’s voice soaring above the whole thing like it never soared before, telling poetic tales of doomed romances and personal dramas in places far and near. If you need an antidote to all the festive pap and miguided optimism this holiday season, get yourself a copy of Aforger, stick on some decent headphones, and dive into Douglas Dare’s cathedralic infinity pool. 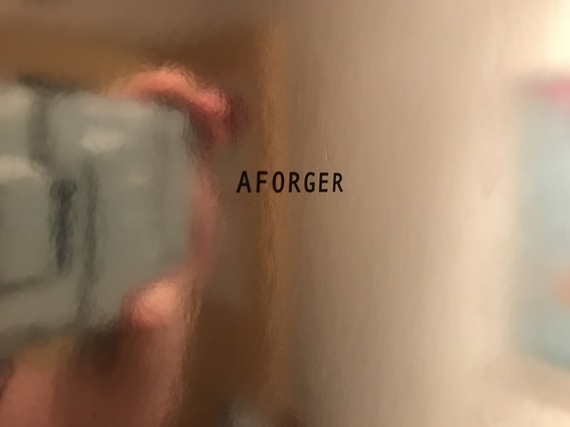 Douglas Dare’s Aforger. The vinyl comes with a free mirror on the back of the sleeve.

Ah, the Brewis brothers. Imagine being a creative partnership with your sibling. I can’t. But there’ve been many of them in rock over the years. I suppose what you get with a brother or sister is a cutting-through-the-bullshit directness which allows you to be as endlessly creative as possible. The best moments on this album – The Noisy Days Are Over, Disappointed, I’m Glad, Same Name – display this unfettered drive better than practically anything else I’ve heard this year. I guess Field Music’s insularity might also be responsible for the record being just a tad too long, but generally it’s a fresh, funky barrage of itchy tunes, as if someone’s imprisoned Steely Dan in a Sunderland warehouse for a few weeks with only the occasional Pot Noodle for refreshment.

Sometimes, I don’t want nice music. I don’t want pretty harmonies, carefully crafted middle-eights, universally positive themery and endlessly heartfelt balladry. I want a grimy, twisted, ear-splittingly grungy racket with barbed lyrics screamed at me by a man who looks like he’d make a decent assassin unless you served him a well-made cup of tea. I want lurching, lumbering “hit singles” called things like Back When I Was Brilliant, scratchy blasts of sarcasm called things like Proper Music and In Grass Parade, and Young-Knives-esque middle class psychodramas called things like Miner’s Gruel. For those special moments, thank goodness we have Future Of The Left.

I know very little of the background to Varmints, but there’s a made-up story which pops into my mind whenever I listen to this madcap fairground ride of a record. Hardcore classical composing wunderkind Anna Meredith is hanging out in a café somewhere, and on comes an Everything Everything record, or a Dutch Uncles record, or even a Foals record. She knocks back her coffee, thinks, “Your know what? I can out-math these slackers,” pops into a nearby studio and a year later emerges with Varmints under her arm. Am I anywhere near the truth? Who knows. All I know is that Varmints is forty-seven of the most entertaining minutes you will spend this year, sounding not unlike a jam session between John Adams and Vince Clarke after dropping a tab of acid each.

In the name of not being totally predictable, I really tried to not include this one. Really I did. But hell, it’s like trying to not include William Shakespeare in a roundup of the best late-sixteenth century English playwrights. Incredibly, I still occasionally encounter Radiohead fans – usually the old-school Bends/OK Computer mob who tuned out when Amnesiac didn’t turn out to be the “normal” yang to Kid A‘s leftfield ying – who haven’t yet heard A Moon Shaped Pool. So at the risk of oversimplification: this is a very good Radiohead album. Good like No Surprises is good, like Fake Plastic Trees is good, like Talk Show Host is good, even like Ripcord is good. But also, good like Nude is good, and like The Gloaming is good. Right, I think I’ve exhausted that particular motif long enough. Look: it’s good, all right?

She Drew The Gun – Memories Of The Future (Skeleton Key)

Of all the global problems we face as 2016 draws to its awkward, shuffling close, one stands taller in my mind than most: not enough people know about She Drew The Gun. That sounds like one of my dumber jokes, but I’m actually serious. Because SDTG’s singer, Louisa Roach, writes songs like If You Could See, a warning from an inhabitant of a particularly screwed-up future world, telling us to basically sort our shit out or global destruction and general nastiness will quickly ensue. She writes songs like Poem, a misleadingly mellow bile chant about the increasingly yawning rich/poor divide. I could go on. Essentially, if Apple were to invent some new device to upload Roach’s lyrics into every greedy fuckwit’s brain the planet over (the iRoach, perhaps?) things might get a little better. Oh, and the music’s pretty damn rocking too. Hats off to a particularly unique talent, and lest we forget, hats off to The Coral for discovering it. 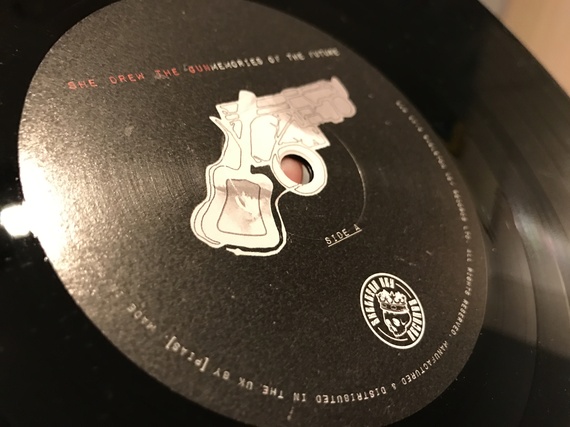 Memories Of The Future. My index finger visible through the hole.

Stoner rock from another world. Well, it might as well be; Sinoptik hail from eastern Ukraine, where the first world problems of British bands vanish into a civil war bomb crater. Somehow, this epitome of the power trio manage to play headline-standard rock shows without so much as an LED by way of stage production, and somehow, they’ve made one of the most inventive albums I’ve heard in a while. Like Teleman, their strengths lie both in a hunger for moving sounds forward, but also with a reverence for the past: Hail tips its hat to both Zeppelin and the folky end of grunge, while Crop Circles sounds a bit like the Chemical Brothers covering a movement from Pink Floyd’s Echoes. And as musical visionaries worth keeping an eye on go, singer/guitarist/keyboardist Dima Sinoptik is up there with Brodka in his all-encompassing full bodysuit of pure talent. 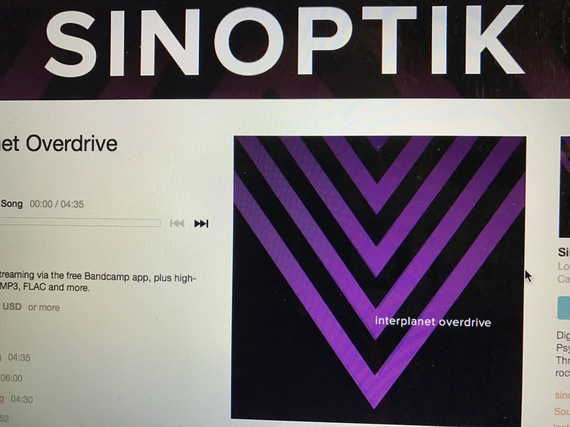 Interplanet Overdrive. Not available physically, so here’s what it looks like trapped inside my computer.

What with Future Of The Left’s masterful Back When I Was Brilliant, “brilliant” is shaping up to be my Word Of The Year where music is concerned. And there is indeed something brilliantly sane about Teleman. On the face of it, their journey from the meat’n’potatoes of former band Pete & The Pirates to the jolly krautrock of Düsseldorf is a logical, sane, even predictable one. But what lifts them above everyone else – and where the sane turns inwards, if you will – is their evident and deep love for 1970s pop. Glory Hallelujah sounds like Tangerine Dream covering an ELO song (or maybe the other way round). Superglue has a certain 10cc-ish charm to it, while also suggesting the band have been listening to McCartney II, which is never a bad thing. The whole album pops with earworms and quirky grooves, with singer Thomas Sanders engagingly guiding us through the restless aural terrain in a tone suggesting what David Gedge might have sounded like as a teenage choirboy.

And there you have it. Thanks for reading my words this year, have a walloping good Christmas and Happy New Year and see you on the other side. Thanks as ever to the Huffpost team and all at Fink HQ. x